All we know is the recipe we tested certainly tastes like KFC. And whatever it is, it’s finger lickin’ good. 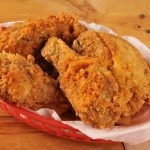 With the oil temperature just right at 350 degrees, the chicken soaked in buttermilk and coated just once in the breading mixture, we had our final tasting.

How was it? Well, really good. In fact, tasters agreed the test kitchen fried chicken was even better than the Colonel's.

But more important, did it taste like the Colonel's secret blend of herbs and spices? It came very close, yet something was still missing. That's when a reporter grabbed a small container of the MSG flavor-enhancer Accent (how did that get in the test kitchen?) and sprinkled it on a piece of the fried chicken. That did the trick. Our chicken was virtually indistinguishable from the batch bought at KFC. (Does KFC add MSG? A KFC spokesperson confirms that it does use it in the Original Recipe chicken.)

One thought on “KFC Secret Recipe”